Plant a tree in memory of Charles R. "Bob" Reagan
An environmentally-friendly option 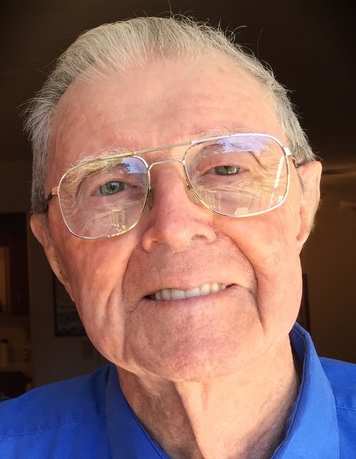 Charles R. (Bob) Reagan died at his home Thursday, March 18th at age 98 and a half.  Bob often said he never expected to live so long, so at age 97 he began celebrating his birthday each month on August 16th.  It was truly his nature to be positive about his life and grateful for its many blessings.

He was preceded in death by two wives:  Doris Mae Albertson to whom he was married for 44 years; and Audrey Timberlake Murphy who he married in 1996 following the long-distance rekindling of their high school romance some 58 years earlier.  Bob talked about the great positive impact both women had on his life in his 2006 book, "Skimming the Cream”.  The book’s dedication page reads:  “To Doris and Audrey, who each in turn has made my life so very much happier than it could possibly have been without her"

Bob grew up on a farm near Corydon during the Depression.  He played high school basketball for the Mauckport High School “Pilots”, and then for New Augusta High School near Indianapolis, graduating in 1940.  This experience sparked a lifetime love of basketball, especially anything related to the Indiana Hoosiers and the New Albany Bulldogs.

After graduation he first joined a CCC Camp, then enlisted in the Army, crossed the Atlantic and served as an armored infantryman in Europe during WWII.

Following the war, he attended Indiana University on the GI bill, earned a Bachelor’s Degree, then a Master’s Degree in 1950.   Shortly thereafter he went to work for DuPont, where he worked more than 30 years.  He became personnel supervisor and safety supervisor at the company’s plants in Indiana, and then Kansas.

After retiring he embarked upon what essentially became a second career – that of a writer – publishing more than 1,000 articles published in business journals, magazines and newspapers.

Funeral services will be private at Beanblossom-Cesar Funeral Home in Corydon.

The family requests that expressions of sympathy be made to the Benevolent Fund at First Baptist Church, 813 East Spring Street, New Albany, Indiana 47150.

Plant a tree in memory of Charles R. "Bob" Reagan
An environmentally-friendly option

Plant a tree in memory of Charles R. "Bob" Reagan

A Memorial Tree was planted for Charles R. "Bob" Reagan

Plant a tree in memory of Charles R. "Bob" Reagan